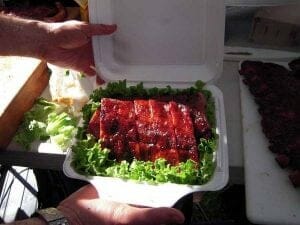 Do you make the best smoked ribs in your neighborhood? Thinking of entering your ribs in a barbecue competition?

The raw truth is that the smoked ribs your family and neighbors love at home may not necessarily work in competition. When I started competing with team Smoke In Da Eye in 2003, I was certain that my backyard rib recipe was good enough to hold its own among the barbecue circuit’s seasoned veterans. Suffice to say, it did not. In fact, my ribs came within spitting distance of dead a$$ last (DAL), as did the other three categories I entered.

I walked away vowing never again to compete. But the competition bug hit me hard, and I was back at it a month later. During that brief break, I turned to online BBQ forums and fellow competitors for advice on improving my rib score. Slowly but surely, my ribs began to move up the rankings, and a few contests later I got a top ten call.

In the spirit of camaraderie and to honor those who helped me up my game, here are my best tips for competition barbecue and my personal ribs recipe. Think of the recipe as a template, and free to customize it with different rubs, sauces, and seasonings. 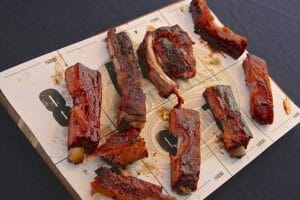 1/4 cup (1 stick) margarine such as I Can’t Believe It’s Not Butter, cut into 1/2 tablespoon pieces

1/4 cup of your favorite BBQ sauce

*About the salt: Remember, kosher salt is half the concentration of table salt so if you use table salt, use half as much. Click here to read more about salt and how it works.

2) Season the ribs with Kosher salt. If you can, give the salt 1 to 2 hours to be absorbed. The process of salting in advance is called dry brining. The rule of thumb is 1/2 teaspoon of kosher salt per pound of meat, but ribs consist of only about 50% meat, so use about 1/4 teaspoon per pound. You can simply eyeball it by sprinkling on the same amount of salt you would sprinkle on the ribs if they were served to you unseasoned.

3) Fire up. Prepare a smoker for indirect cooking.Adjust the smoker to bring the temperature to about 225°F

4) Once the smoker is ready, brush both sides of ribs with mayonnaise and season with Meathead’s Memphis Dust dry rub.

5) Cook. Place the slabs of ribs meat side up on the main cooking grate as far away from the heat source as possible. Cover the smoker or grill. Allow the ribs to smoke until the meat just begins to shrink back from the ends of the bones, about 3 1/2 hours.

7) Place the foiled ribs sealed side up on the smoker or grill and cook until the ribs shrink back from the ends of the bones by 1/4 to 1/2 inch, about 1 hour. 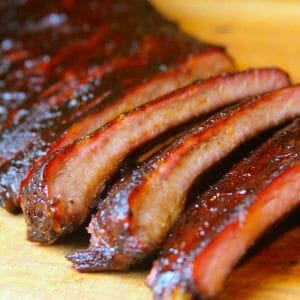 10) Serve. Remove the ribs from the smoker or grill, and slice. For competition, set 4 to 5 ribs side-by side in the turn in box and top with another 4 to 5 ribs. 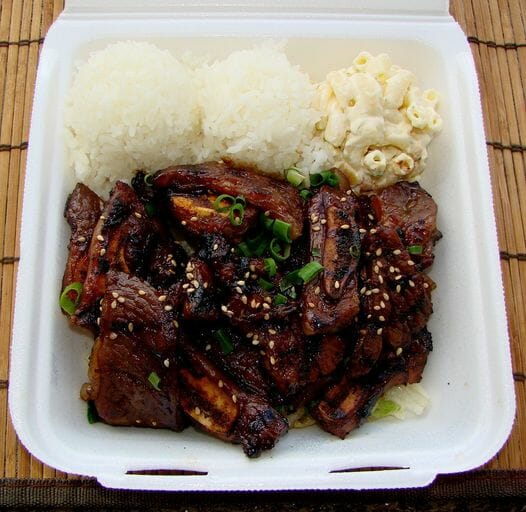